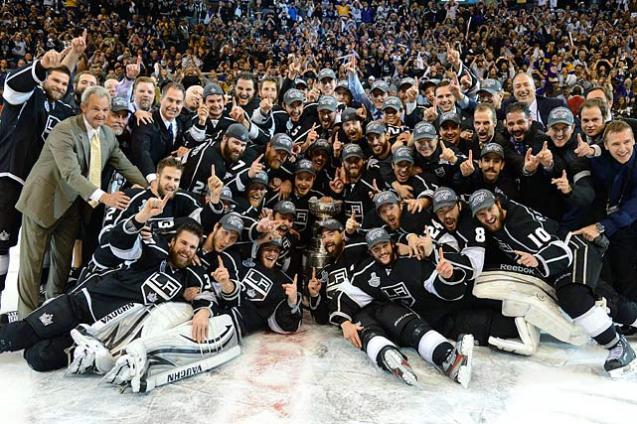 Few people will ever have the chance and most players go an entire career without touching the Cup.

On Monday night, following their 6-1 game six victory over the New Jersey Devils, Kings players lifted the Cup high above their heads.

While millions watched on TV and almost 20,000 Kings fans cheered at the Staples Center, Woodstock native Jake Muzzin was among the players.

“It’s always your dream to hoist the Stanley Cup and be a part of that,” Muzzin said. “For it to happen, it could be a once-in-a-lifetime chance, so I’ve enjoyed every moment.”

As one of the Kings top defensive prospects, Muzzin was called up to the NHL on April 30 after the Kings farm team, the Manchester Monarchs, was eliminated from the first round of the AHL playoffs by the eventual Calder Cup champions Norfolk Admirals.

Muzzin had seven goals and 24 assists in 71 games with the Monarchs. The 2009-10 winner of the Max Kaminsky Award for top defenceman in the Ontario Hockey League has showed promise of one day being a top-four defenceman in the NHL.

Although he didn’t play during the Kings playoff run, he had a front-row seat to watch them dismantle Vancouver, St. Louis, Phoenix and New Jersey to win the Stanley Cup.

“We travelled and practised with the team every day, so being a part of it and watching the guys and how they react and handle themselves was a great learning experience,” Muzzin said. “Just from being there, you learn a lot.”

Muzzin was one of 11 players called up on April 30. After eliminating Phoenix to win the Clarence Campbell Trophy and the Western Conference, the Kings sent all but three players home. Muzzin, goaltender Martin Jones and forward Marc-Andre Cliché stayed for the Stanley Cup series.

“They just said stay ready. There were 11 of us and then cut down to three after (beating) Phoenix, and they said you never know what could happen,” Muzzin said. “So be ready and stay focused.”

Having already played 11 games in the NHL, Muzzin was ready if needed. 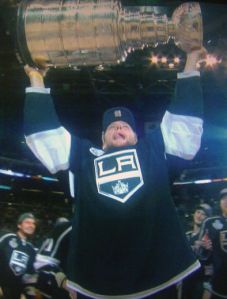 With about 10 minutes left in game six, and the Kings holding a 4-1 lead, Muzzin, Cliché and Jones were told to go to the Kings dressing room and change.

“We got ready and went down to the bench with a couple of minutes to go and waited for the buzzer and all went out there into the dog pile,” Muzzin said.

When most of the Kings players had had their turn to lift and skate with the Cup, the three Monarch players got their chance to carry it.

“When Cliché passed me the Cup I got pretty excited and didn’t know what to do with it so I just threw it over my head and did a little skate and handed it off,” Muzzin said. “It was pretty surreal, but exciting at the same time.”

Although he didn’t know if he would get a lap with it, Muzzin said the Kings players made sure they did.

“I didn’t know if we were going to lift it since we hadn’t played any games, but all the guys on the team were for it and wanted us in there.”

He passed the Cup to Jones and after more celebrating on the ice, returned to the dressing room, checked his phone and saw the congratulations that had poured in.

“My phone was buzzing all night,” Muzzin said.

It’s unlikely Muzzin will get a day with the Cup, he said, given that he was a playoff callup, but he said having gone through the past two months with the team has only made him want it more.

“Going through this experience has made me hungry to make it in the NHL and lifting the Stanley Cup was a real special moment.” Muzzin said. “I learned a lot and it taught me a lot on what I need to do to be an NHL player.”

For Muzzin’s dad, Ed, it was a special moment for Jake and their family.

“You think about things that might come true in your life and that was one of them,” Ed Muzzin said. “It’s pretty special.”

Growing up, Ed always hoped for the best but realized how unlikely it was. Above all else, he was always happy for the moments it gave him and his son.

“I just thought we were out having fun and spending time together. That’s why you get him involved in something that’s team related like minor hockey and you hope he keeps the memories for later in his life when you’re both old,” Ed Muzzin said. “That’s all we thought about when he was a kid, having fun and some good times.”

After a long year, Jake Muzzin hopes to be back in Woodstock before Father’s Day and start training in Barrie after a few weeks of rest.

“It’s been a long year and I’ve been living in a hotel the past couple of months, so I’d like to get home and see family and friends and relax a bit before I start training again.

As for the celebrations, players, friends and families celebrated into the night and well into the morning.

“The celebration was good,” Muzzin said. “You win the Stanley Cup, you’ve got to party and enjoy it. You always see videos of guys drinking out of the Cup and popping Champagne in the room and there you are doing it.

“It was surreal and being there with a couple of good friends – Jordan Nolan and Dwight King, who I roomed with for two years in Manchester – it was fun to be there and enjoy it with them,” Muzzin said. “It was just a great night.”

Source: Appeared in the Woodstock Sentinel-Review on June 13, 2012